Jerry:  847.707.6888
[email protected]
Ken:  847.309.4740
[email protected]
Pics
Most of us have had it happen at one time or another. You go into a restaurant and flip over the menu and there on the front or back cover you can't miss it------"Our story." In other words, how this place came about way back when.
As life would have it just about everyone has a story of one kind or another. So in answer to the questions of many of our riders, here is ours:
On a nice spring day sometime during the last century Jerry's Dad brought home his first bike. It had two wheels and no gears. After a half hour or so of instruction and practice he set off alone on a trip around the block. He was five years old.
At an early age the family moved to Illinois, but Jerry's heart and his bike routes were still fond of his Wisconsin bike rides. When Lenore and Jerry married they toured Wisconsin frequently and always went on Wisconsin bicycle tours. Many of their routes were the PAW routes of today.
The first Pedal Across Wisconsin tour was a weekend in June of 1985 from Northern Illinois to Whitewater, WI. Other weekends that season were scheduled in Door County and New Glarus.
As it is today, PAW was family operated with the motto "Bikers Planning for Bikers." Lenore prepared all the Que sheets, registration forms, and room lists while shopping for food stops and keeping track of finances. If there were 90 riders on a trip she knew 90 names. In her spare time she turned out 255 dozen chocolate chip cookies along with an assortment of mint brownies and other goodies quickly devoured by PAW riders.
A late deafened adult, Lenore was a self-taught expert in sign language and lip reading and ran check in, managed food stops, and drove a sag van while most riders never knew of her impairment. Over fall and winters she graduated from the school of education at Northern Illinois University with nearly all A's, never having heard a word spoken by any of her teachers. After her passing in 1992 the family voted to continue the tours, and with the encouragement of PAW Alums rides went on as scheduled.
PAW Alums are now found from coast to coast, Canada to the Gulf and even Europe. Loyal Alums spreading the word of good times with good people and scenic quiet roads have kept riders coming to bicycle heaven.
Meanwhile, the next generation has arrived. Ken has been instrumental in new route development while taking over the website and given it a refreshing upgrade. Nikki has added her own organizational and baking skills to food-stops and still finds time to pick out tee shirts and make fanny flags. Janice has smoothly moved the PAW office into the new century, producing Que sheets, keeping registrations and room lists up to date. Family and PAW Alums still join to form a crew that riders have acknowledged as tops.
As for the future, Bicycle Heaven will be there for awhile, and so will we. Call or email us today to learn more about our Wisconsin bike tours. 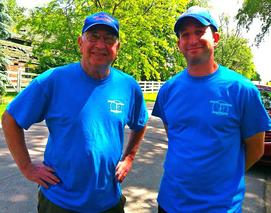 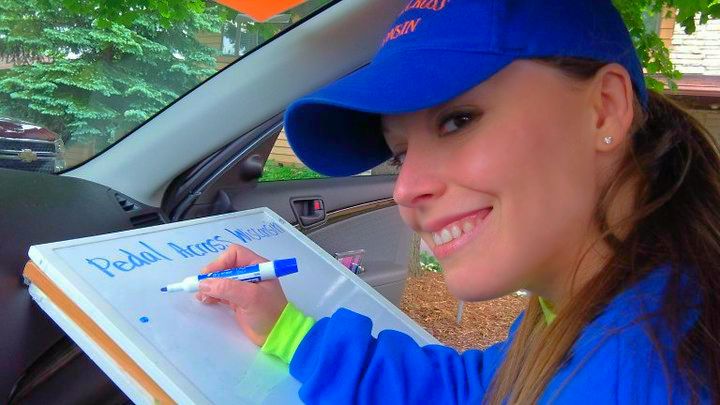 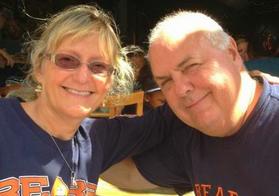 The crew having an official board meeting.
Copyright 2012: Pedal Across Wisconsin | Wisconsin Bike Rides | All rights reserved.
847-707-6888 | [email protected]

About our Wisconsin Bike Tours

Pedal Across Wisconsin
About Us
The one and only Dr. J.
Since 1985
Weeklong bicycle trips created by bikers.
Dr. J. Pedal has been organizing bicycle trips in Wisconsin since the 1980's, with an emphasis on scenic, quiet backroads. Whether a seasoned rider, or taking your first organized bicycle trip, our backroad routes, food stops, and easy to follow road marks will keep you coming back. 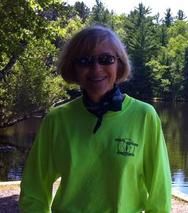